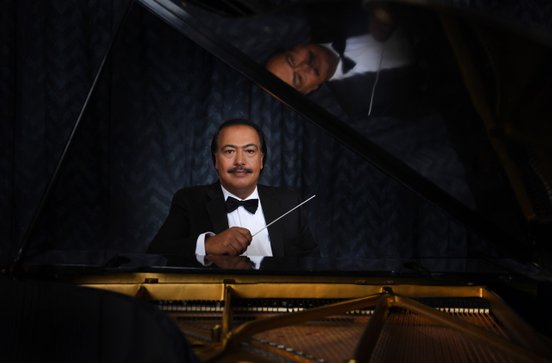 Shapor was born into a musical family in Iran. All three of his older brothers graduated from the Tehran Conservatory of Music and have played in the Tehran Symphony Orchestra. Shapor was 10 years old when he entered the music conservatory and after
obtaining a piano diploma, he began studying composition. In addition to the education, he worked as a stage manager for the opera and ballet in Rudaki Hall, Tehran. After completing his education, Shapor came to Sweden and studied a course in film music in Stockholm. Shapor has written a large number of music pieces for symphony orchestras, most of which have been directed by himself.
Among other things, he has worked with Los Angeles Philharmonic,
Oberhausen Symphony Orchestra and Cologne Radio Orchestra. Shapor has also had a broad collaboration with musicians with different cultural backgrounds, including Kurdish and Arabic musicians and singers and have cooperated in this regard with a series of orchestras in Turkey, Czech Republic and France.
Shapor has an extensive collaboration with the Swedish National Theater, and one of his most important collaborations was the music theater INA' a story about me and Nina Simone which premiered in Liverpool in October 2016 and has since played over around Sweden and has played in various places in both England, Irland, Skotland and USA over 120 times. Shapor accompanies the musical as a pianist and musical director. Shapor has also arranged two of Nina Simone's songs (Mississippi goddam and Revolution ) for the symphony orchestra and choir which were played for first time at the WOW festival (women of the world festival) in South bank, England.