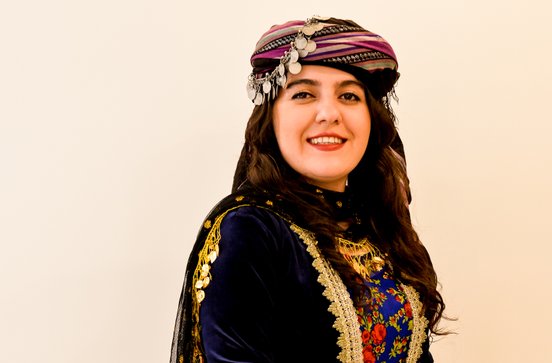 Donya Kamali was born in 1991 in Kermanshah. She is a talented instrumentalist and a vocalist with a magic voice.
She learnt how to play Tanbour from great Tanbour players such as Darvish Ali Morad Kamali, Darvish Sheykh Morad Kamali and his father, Fereydoun Kamali and her uncles.

She started singing at a very early age and mesmerized everyone with her magic voice.

She has achieved several awards since 2001 from Kurdish Music Festivals at the time that she was only a teenager.

She has also worked with Tahmoures Pournazeri, who is also a great composer and musician, in well-known projects such as Female Voices of Iran which was held in Gutenberg.

She has played Tanbour alongside Kaykhosro Pournazeri in a Sufi music ensemble called the Shams Ensemble and had performed and sang in numerous music festivals including Barana Music Festival (2016, Kermanshah, Iran) and Konya Sufi Music Festival (2018, Konya, Istanbul).