Kiosk is a pioneering Iranian rock band (The Berlin Daily Newspaper) founded by Arash Sobhani in Tehran in 2003. The name of the band, Kiosk, stems from the original formation of the group in Tehran, when its members gathered together in any possible makeshift space or “Kiosk” to play their music without fear of arrest.

After censorship and restriction by Iranian authorities, its musicians immigrated to the U.S. and Canada. The band has since toured throughout the world and released eight albums. Kiosk is known for its satirical lyrics, which provide a socio-political commentary of life in Iran, as well as its blend of several music styles, from Iranian folk to gypsy jazz to rock. Kiosk's music has been described by BBC World as "songs that speak to a generation...Kiosk's stinging political satire is hidden within its blues and folksy sound." Haaretz has referred to Kiosk as the most popular Iranian rock band in the Iranian diaspora, while Ahram Online describes how the band gives a voice to their generation.

Kiosk's live album "Triple Distilled," recorded at Yoshi's Jazz Club, was chosen by presenter Mark Coles from BBC World's "World of Music" as one of the ten best world music albums of the year, alongside such artists as Paolo Conte and Ali Farka Touré. TIME Magazine has called Kiosk "a band that can criticize the Iranian government without retribution," while Frontline PBS has praised their "eclectic sound that incorporates a multitude of instruments and styles." The Guardian and Radio Free Europe have reported on Kiosk's popularity amongst young Iranians. Frontman Arash Sobhani's lyrics have been referenced by The New York Times and referred to by the Frankfurt General Newspaper as "a guiding light for many,” while Frontline PBS refers to Sobhani's “poignantly powerful lyrics...and smooth, melodic tone that belies the fire and rage of one of Iran's most prolific contemporary social critics." As Aslan Media, founded by Reza Aslan, writes: "Kiosk offers an honest opportunity for self-reflection in a society that has nearly seventy-percent of its population under the age of thirty. For younger generations of the diaspora who have yet to visit their parents’ homeland, Kiosk delivers unpretentious music that speaks of a society caught between East and West, trapped between past and present, leaving no direction to look but within." 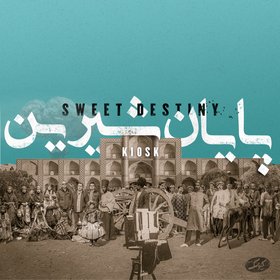